Some Basics About Ovarian Cysts

An ovarian cyst is a sac that contains either a fluid or a fluid and solid mixture. They can grow either in the interior or on the outside surface of the ovary. While cysts can burst, hemorrhage or induce pain requiring surgery, most are harmless and will normally disappear on their own.

There are a large variety of ovarian cyst types and they have a broad range of growth sizes. Most are about the size of a pea but in some rare occasions they may measure over 40 inches in diameter and weigh about 100 pounds. There are a wide range of symptoms for ovarian cysts, from no symptoms to severe pain. Ovarian cysts have a lot of different causes, but most are a product of the ovulation cycle.

Ovarian cysts are usually of a benign type called functional cysts because they happen as a result of the ovulation cycle. There are other types of benign cysts including endometrial cysts, cystadenoma cysts, and dermoid cysts.

Often a person isn’t aware that she has a cyst until it’s discovered during a pelvic exam. Upon discovery of a cyst, a plan of treatment is formulated on the basis of the results of tests. These tests may include ultrasound to determine a cyst’s location, shape and size.

Ultrasound testing will also give information on whether the cyst is liquid, a solid, or a combination of liquid and solid. Hormone testing may be done to detect hormone related problems. A blood test may be used to check for cancerous cysts.

Your doctors diagnosis is the only way to be certain that you have them. Sometimes women with no apparent symptoms discover to their surprise that they have cysts after their checkup. Others find out that they have a completely different disorder even though they have painful abdominal symptoms.

The nature of a cyst as well as its type will decide its proper treatment. A cyst that’s small and painless, probably won’t require treatment. Birth control pills may be prescribed to repress ovarian cysts by stopping ovulation. They can also shrink down the diameter of an existing cyst.

The greatest concern of all with ovarian cysts is whether they’re benign or malignant. Even if benign, ovarian cysts may pose serious health risks if they continue to get larger, or rupture, or proliferate extensively. This is why it’s essential that they are monitored by your doctor on a regular basis.

Any ovarian cysts pregnancy related need to be evaluated and treated with extreme care. Because you are pregnant, the options also have to consider the health and well being of the baby as well as your own. Many cysts that occur during pregnancy are harmless, and will resolve themselves and go away with no medical treatment at all. Problems can occur though, especially if the cysts are large, may be cancerous or because they are complex, or pose a threat to the health of the baby because of their location. If the ovarian cysts pregnancy are just simple fluid filled cysts that are small and benign, your doctor may put you on bed rest with specific instructions to encourage your body to resolve the issue. If the cysts are large, or if pathology is suspected, then simple monitoring may not be an option.

Around one in every thousand pregnant women will experience ovarian cysts pregnancy at some point in their childbearing years, and the rate of these cysts being cancerous is around one in every twenty five thousand births in the U.S. every year. If you have a large cyst, or cysts that are suspicious or interfere with the growth or blood supply of the baby or your ovary, surgery may be needed. If ovarian cysts pregnancy rupture or twist on themselves cutting off blood to the ovary and area, this can cause you to experience severe pain, and can result in a miscarriage or premature labor resulting in delivery too early in the pregnancy. If surgery is needed to remove any ovarian cysts during your pregnancy, the ideal time is between fourteen weeks and sixteen weeks for minimal risks to the baby and lowered risks for a miscarriage or premature labor and delivery. If you are pregnant and have ovarian cysts, discuss all the available options and choices, as well as any questions you have, so that you can choose the right treatment and have all the information available. 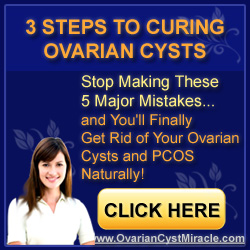 Success Story : Matilda Bates " I have taken 2 ultrasound tests in the last six months and both clearly showed that I am ovarian cyst free!" "Dear Carol, Your program has worked wonders on my ovarian cyst condition. I was so intimidated because of the surgery that I had to find a solution for my huge (3.24 inches) cyst of my left ovary (I also had multiple smaller cysts on my right ovary) so I ordered your book and immediately started implementing all of your suggestions with persistence. I was never a firm believer in the alternative approach to healing but it works!. I have taken 2 ultrasound tests in the last six months and both clearly showed that I am ovarian cyst free! I cannot simply thank you enough for your help. I feel so relaxed and vibrant. Other health issues I suffered from had also diminished. 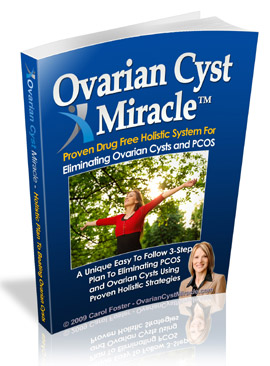 "Dear Carol, It's been 2 years without any Ovarian Cyst or pain. Just wanted to drop you a thank you note for sharing your knowledge and helping women in my situation.

As you recall, 2 years ago I started your program after I have been diagnosed with a corpus luteum cyst and your program had done wonders for me. My ovarian cyst disappeared in less than 10 weeks, I lost 10 pounds, and the PCOS symptoms I often use to suffer from are also a thing of the past. I know I will never have to go through that again.

An ovarian cyst is a fluid-filled sac within the ovary.[1] Often they cause no symptoms.[1] Occasionally they may produce bloating, lower abdominal pain, or lower back pain.[1] The majority of cysts are harmless.[1] If the cyst either breaks open or causes twisting of the ovary, it may cause severe pain.[1] This may result in vomiting or feeling faint.[1]

Most ovarian cysts are related to ovulation, being either follicular cysts or corpus luteum cysts.[1] Other types include cysts due to endometriosis, dermoid cysts, and cystadenomas.[1] Many small cysts occur in both ovaries in polycystic ovarian syndrome.[1] Pelvic inflammatory disease may also result in cysts.[1] Rarely, cysts may be a form of ovarian cancer.[1] Diagnosis is undertaken by pelvic examination with an ultrasound or other testing used to gather further details.[1]

Often, cysts are simply observed over time.[1] If they cause pain, medications such as paracetamol (acetaminophen) or ibuprofen may be used.[1] Hormonal birth control may be used to prevent further cysts in those who are frequently affected.[1] However, evidence does not support birth control as a treatment of current cysts.[2] If they do not go away after several months, get larger, look unusual, or cause pain, they may be removed by surgery.[1]

Most women of reproductive age develop small cysts each month.[1] Large cysts that cause problems occur in about 8% of women before menopause.[1] Ovarian cysts are present in about 16% of women after menopause and if present are more likely to be cancer.[1][3]